This is the fourth in a series of posts covering concepts in functional programming:

This time around we're talking about phantom types.

We're all familiar with the idea of using Generic types to enhance the safety of our code. In modern compiled languages type parameters are used to control what inputs are allowed into functions and hence what operations are permitted.

The standard options are set out in the Java example below:

When we use the wildcard by itself in tst1 we are saying that any type of input is permitted, which means that nothing can be added and only references of type Object are returned.

When we use an upper bounded wildcard (via the extends keyword) in tst2 we will still be unable to add items, but now the return type can be Manager. So obviously all the methods of the Manager type and its super-types are available.

Finally when we add a lower bounded wildcard (via the super keyword) in tst3 we will be allowed to add items but the return type becomes Object once again.

Everyone finds these rules confusing initially. It helps to remember that with an upper bound the set of matching types is infinite. So for example in the current case there is no limit to the number of classes we write that extend from Manager.

Since there is no 'bottom limit' to the set of types we cannot add a Manager in case the type of T is Director and we cannot add a Director in case someone derives a new class such as CEO. With a lower bound the set of possible types is constrained, in this case to Manager, Employee and Object. So we can insert with confidence but not extract.

What we are not used to doing with Generics is to think of them as a way to validate business rules within the object itself.

For example let's say that within our Employee type there are states we wish to model, these being allocated, available and sick. The first two states can be considered as sub-states of a working state. The methods of our type will transition the instance between these states, as shown in the following UML statechart: 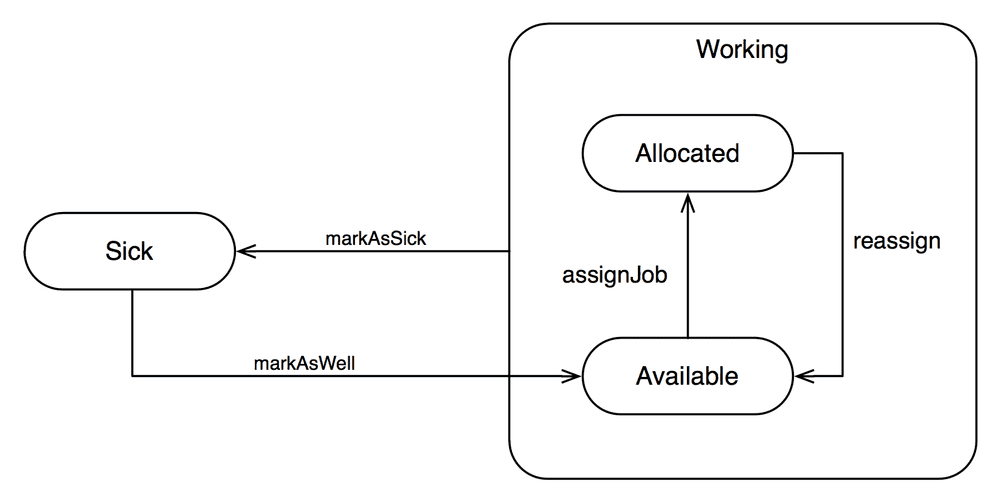 Of special interest to us is the fact that certain methods may only be invoked on an employee object when it is in a particular state. For example we do not want to be able to allocate jobs of work to sick employees.

The Phantom Type Pattern in Scala

We can take the statechart above and implement it in Scala using bounded types.

The type declarations work as follows:

If you look at the methods of Employee you can see that each uses a type sandwich where we are constraining the type of the input.

For example in assignJob the T >: S <: EmpStates.Available type declaration is saying:

Each method returns a new Employee instance in an altered state. So for example assignJob returns an Allocated employee and markAsSick a Sick one.

We can now write code that uses the Employee type, in full confidence that the compiler will prevent us from making invalid state transitions.

Let's list some valid and invalid transitions before examining the code:

As you can see from the comments the compiler itself will prevent you from making method calls that would result in invalid state transitions. Because this is all done at compile time, and the types representing states are never instantiated, there is no runtime penalty. Another way to think of this is as a version of the Design By Contract philosophy, championed by the Eiffel language and implemented in Java via assertions (since V1.4).

This post has presented a 'Hello World' example of Phantom Types in Scala. Heiko Seeberger's original post covers a second syntax, based on implicit parameters, which is shorter and gives clearer compiler messages. However it is much more magical and non-intuitive unless you've been spending quality time with Scala.

Phantom types can be represented more succinctly in languages further up the scale of functional purity, F# and Haskell being the main examples. A closely related area which is slowly gaining popularity is that of Type Driven Development (TDD), also known as Type First Development (TFD) to avoid confusion with the Agile technique.

In TFD you model the states of your type in a manner similar to what we have done, but the compiler and IDE provides first class support for specifying the various states. For example the IDE might provide a shortcut to generate a conditional for all the valid states that an instance might be in. Edwin Brady at St. Andrews has created Idris - the first language to directly support TFD, which went to version 1.0 in April and has an accompanying book.

If you're enjoying these posts, why not subscribe to our newletter or check out our Fast-track to Scala and Scala Programming for Java Developers courses.