The AWS Lambda service offers Functions as a Service (FaaS), which means you simply supply code and AWS will provision servers and execute it in response to events. It can scale up or down in response to demand, and you only pay for the compute time you use.

FaaS offers some major benefits over other deployment techniques, but there are inevitably drawbacks, and currently the biggest one seems to be the somewhat immature developer experience. Tooling is improving, but it's got some way to go. If you stray from the happy path things can get bumpy, with documentation and error messages offering only limited help.

This post looks at how to include dependencies with your Lambda function, and in particular what you need to do if your function relies on native (binary) dependencies.

If your Lambda code requires only the AWS SDK library then you can edit the code directly in the AWS console. 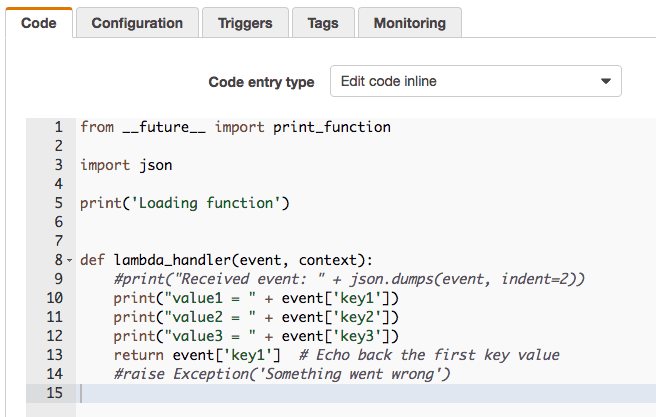 However, aside from Hello, World, this will rarely be appropriate.

If your Lamnda function has dependencies then you need to create a deployment package, which is simply a .zip file containing your function code along with all dependencies.

If the dependencies are platform agnostic (e.g. source code, byte code, text/config files) then this is straight forward. Be sure to check the AWS docs relevant to your function's language to make sure you structure the .zip file correctly, then upload it (either directly or via S3 if it's bigger than 10MB) and configure your Lambda function (via either the AWS console or CLI) with the entry point of the function you wish to call.

If your Lambda function relies on native, binary dependencies that are specific to the execution platform then you need to work a bit harder. The idea is the same as before in that you are providing a deployment package complete with your code and all dependencies, but you need to ensure that the native dependencies have been built for the operating system the Lambda will be executed on. If you grab native dependencies from an install on a different OS you could end up deploying e.g. .dll or .dylib files, which will be useless when the Lambda funciton is executed.

The key is to:

You can access the AWS Lambda execution environment by launching an EC2 instance with the Amazon Linux AMI and SSHing into it. However, an even simpler option is to run the target execution environment as a Docker container. If you use the Amazon Linux container, specifically, then you'll be well set up to test and debug any issues you may have running your code. To do so:

Now all you need to do is install the dependency using whatever method is suitable, bring the resultant files back via the container's /output/ folder, and zip them up into your deployment package as per the instructions for the language your Lambda function is written in.

As mentioned, the documentation tends to stick to the happy path, and error messages often offer only limited help. Remember that error messages returned by your Lambda function can be viewed via the Lambda console, and further details are logged in CloudWatch.

Keep in mind that you may be looking at an error message from the Lambda setup configuration, your code's compilation, or a runtime error. Therefore the first thing you should do is determine where the error you're looking at came from.

If the fix isn't obvious you may need to revert to some trial and error and so you should definitely shorten your feedback cycle as much as possible:

While it may initially take a bit of effort to get your code running in Lambda, in my experience it's worth the effort as for many applications the advantages of serverless computing far outweigh the cost of any teething issues.