Simon says stand up. No, really. If you haven't tried standing for part of your workday you might be missing out.

Some professions require staff to stand for most of the working day but traditionally office environments are based around seated workstations. The roots of the 'office' might be traceable as far back as the middle ages [1], where sitting was a privilege but times have moved on. Employees are beginning to realise that a primarily sedentary lifestyle may adversely affect various aspects of their work and home life – not least of all their health.

At Instil, we opted for a mid-range option that would retrofit the existing office environment. This helped keep costs down while making use of equipment already purchased and in use – i.e. the desks.

The Varidesk is a height-adjustable desk that is easily manipulated between a sitting and standing position at the same work station. Since we were offered a free trial and immediately felt that it was the right option for us, we didn't research many competitors or try any other products. This particular brand may not be to everyone's taste but the marketplace is now much richer for standing desk products so it's always best to fully research within your needs. 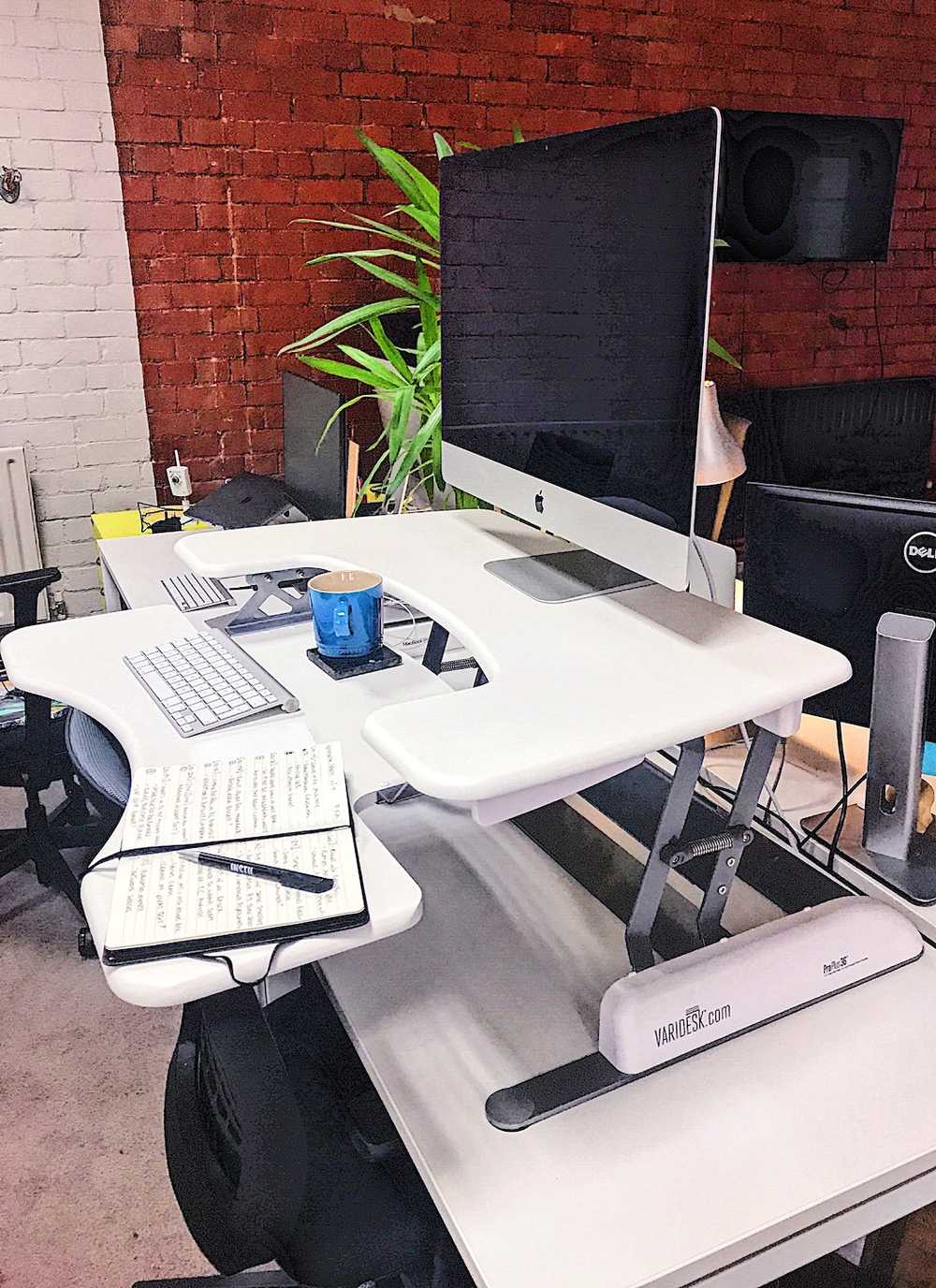 Many reports claim that standing desks can help reduce the risk of obesity and related diseases. The claims stem mainly from the idea that standing burns more calories than sitting and, in turn, encourages further movement throughout the day. By extension, it's possible to then argue that sitting is a health risk factor, causing some studies to look at sitting as akin to smoking in that a lack of physical activity contributes to easily preventable deaths worldwide. While the smoking analogy is certainly extreme, no one is in any doubt of the benefits of moving around more during the day. Of course, we don't need a standing desk to move more but it might help.

Inevitably posture while sitting could leave a lot to be desired. Modern office chairs are usually fully adjustable in order to help provide the optimum position for varying users but this undoubtedly leads to misuse in the form of slouching either forward or back. We've all been guilty of getting absorbed by something and leaning into the screen to read, or even seeking more comfort on an exhausting day by lowering the back of the chair and stretching out a little. While there may not be a 'perfect posture', some positions can have a negative effect on our health in the short and long term, as well as affecting mood. Posture is still important when standing but there is arugably less tendency to slouch or position yourself negatively; a more erect posture is naturally encouraged by a standing position.

Standing and moving around will also help with digestion and blood flow. If you're sitting during your lunch break, standing for a period of time afterwards could help your body process that food. Since sedentary lifestyles are now linked to increased risk of heart disease and obesity, it seems natural that standing can help offset negative effects in these areas.

From all the studies that have been published on the matter, it seems that it's difficult to verify with absolute accuracy that those benefits are directly gleaned from the process of standing. In some respects it's not an exact science. Additionally, there are groups of people who may suffer more than they benefit from standing for prolonged periods such as people with lower back pain.

Standing for too long can cause issues in the same way that sitting can. Standing desks, if used incorrectly, could contribute to adverse health effects such as back and leg pain, or varicose veins.

There is also a worry that those using standing desks may think of standing as a subtitute for regular exercise, which it is not. Although a person may burn slightly more calories this way, nothing should replace regular cardiovasular exercise. You don't have to be a gym bunny to hit your quota, even some daily walking, light jogging or resistance-based exercise is helpful.

A quick search around the web will uncover many links to studies and reports on the potential benefits or disadvantages of using standing desks in the workplace. Much of it will come down to how you use it however and, in particular, how long you use it for. Like most things in life, moderation is really the key to getting the most from a standing desk.

While some offices may offer traditional desks as standard with a separate area for standing, most will instead provide height-adjustable desks of some variety. Either way, there should always be the option to sit for prolonged periods also within the standing desk environment. The idea of the standing desk is not to stand all day but rather to take a balanced approach. Some studies indicate between four to six hours is about right. If you have an eight hour working day then this should be easy to break up.

Although there is a general feeling that too much sitting is bad, some sitting is certainly not. In other words, when you've been standing for while, you then get the full benefit of sitting. To get the most of both, alternate between standing a little and sitting a little.

It's also worth factoring in what you'll be doing before or after work. For example, if you stand for 30 minutes on a commute, factor that into your standing time that day accordingly. Conversely, if you know you'll be sitting all evening, then standing for most of the day could be very beneficial.

For those people who are actively seeking to reduce weight or improve fitness, this is also possible while you work. While most offices are perhaps not best equipped to handle larger machinery, people have enjoyed treadmill desks and cycling desks too.

Perhaps instead budget is a key off-putting factor when deciding to try a standing desk. There are many examples of home made DIY efforts with which people have enjoyed all the same benefits. For myself, I don't have anywhere to put a standing desk at home so a £15 music keyboard stand at its highest setting serves well to hold a laptop. This isn't ideal for additional activities like taking notes or plugging in devices or peripherals such as an external keyboard, but it works surprisingly well for me and is even portable should I wish a change of scenery when working from home.

With all that in mind, how do we feel generally about standing desks here at Instil? Very postively! Overall they've been a great addition to our office with those using them often reporting similar findings and benefits. These include:

Increased focus, especially in the morning. One study found that with treadmill desks there was a drop in accuracy and focus during use [2] but that hasn't been our experience when standing.

It's amazing how much more awake and vitalised you feel when you're upright.

When you don't need to find a spare seat to pair up or chat at a colleague's desk, interacting with coworkers becomes easier and more inviting.

Through an increase in focus and energy, productivity can take a boost.

Let down time be down time – literally. It's possible to appreciate sitting to relax more when you've been standing for a while.

When you're standing you tend to move more, which feels good!

We've come to embrace standing desks as a new office norm. While they should not be seen as a substitute for regular exercise, those using them at Instil have enjoyed a range of benefits not just to their health but in their productivity and office interactions also. This may not be everyone's idea of how they wish to spend their day but the truth is that most of us could benefit from getting up and moving more - something which the humble standing desk encourages in spades.